The members of the IAH Karst Commission (KC) have published a large number of papers and books dealing with karst hydrogeology, which can be found on their individual homepages or using conventional search tools. The list below includes highlights of the publications with a significant involvement of the KC members since 2007.

The book was published by CRC Press, Taylor & Francis Group (https://www.crcpress.com/Engineering-Karstology-of-Dams-and-Reservoirs/Milanovic/p/book/9781498748070). it contains vast practical engineering experience acquired by Prof. Milanović during his many years of dealing with dams and reservoirs in a complex environment such as karst. A wealth of data is presented in 13 chapters and on 356 pages, including recommendations for site selection, research methods, various technical solutions for remedying or preventing water losses, as well as lessons learned from dam projects executed in karst throughout the world.

A practical book for both specialists and non-specialists. 318 pages long, and all the chapters contain excellent photos and illustrations. Such an exceptional visualisation of karstified areas is especially useful for decision makers and may facilitate effective environmental management. https://gsi.ie/gsishop/Product.aspx?Productid=1513&Catid=20

Members of the Karst Commission publish a series of Reviews in Karst Hydrogeology, with the goal to collect, evaluate and disseminate relevant knowledge in this field. To date, the following review papers have been published by different KC authors in different journals:

2017: The first article presenting the work on the World Karst Aquifer Map – WOKAM has been published by Chen Zhao and co-authors, members of the project Scientific Advisory Board (Hydrogeology Journal, DOI 10.1007/s10040-016-1519-3). The article has been designated as “an Editor’s Choice” as one of the 5 best and/or most important papers among all 140 papers published in Hydrogeology Journal in 2017.

2016: Following the international conference EUROKARST 2016 held in Neuchâtel, the Springer published the book Advances in the Hydrogeology of Karst and Carbonate Reservoirs. The book is edited by Ph. Renard and C. Bertrand and contains 35 contributions.

Zoran Stevanović, Neven Kresic and Neno Kukuric have edited Volume 23 of the IAH edition “Selected Papers” – Karst without Boundaries. The volume published by CRC Press, Taylor & Francis Group contains 23 contributions presented during the international conference of the same title held at the end of DIKTAS project in Trebinje, Bosnia & Herzegovina in June, 2014.

2015: Zoran Stevanović edited the Springer’s book Karst Aquifers – Characterization and Engineering which includes contributions of 14 Karst Commission members. This is the first volume of a new series Professional Practice in Earth Sciences.

Francesco Fiorilo and Zoran Stevanović have edited a thematic issue of the Environmental Earth Science as a collection of contributions from authors of the Mediterranean region in the speciﬁc ﬁeld of karst hydrogeology. The idea to have such an issue originated during a meeting organised by the IAH-Italian Chapter in preparation for the 42nd Congress of IAH held in Rome in September 2015 (AQUA 2015).

2014: Papers presented at the 5th International Symposium on Karst (October 2014, Malaga) have been published in a book Advances in Research in Karst Media, edited by B. Andreo, F. Carrasco, J.J. Duran and J. LaMoreaux (Springer Publ.),

2013/2014: N. Goldscheider and T. Geyer have edited two special issues of the German SCI journal “Grundwasser” on karst hydrogeology, with contributions from many German, Austrian, Swiss and US American KC members.

2013: The two books of N. Kresic were published by renowned publishers:

2012: Selected paper presented at the Karst Symposium in Malaga in 2010  have been published in a special issue of Environmental Earth Sciences, edited by Bartolomé Andreo and Jim LaMoreaux (Volume 65, Number 8, April 2012): http://www.springerlink.com/content/1866-6280/65/8/

2011: Selected paper presented at the Karst Symposium and KC meeting in Malaga in 2010  have been published in a special issue of Carbonates and Evaporites, edited by Bartolomé Andreo and Jim LaMoreaux:
http://www.springerlink.com/content/w0402m146x50/

2010: Papers presented at the 4th International Symposium on Karst (April 2010, Malaga, where the KC held their 2nd Meeting) have been published in a book “Advances in Research in Karst Media”, edited by B. Andreo, J. LaMoreaux and others. The book is the first volume of a new book series “Environmental Earth Sciences” (Springer).
http://www.springer.com/earth+sciences+and+geography/hydrogeology/book/978-3-642-12485-3

2010: O. Bonacci & M. Juracic have edited a special issue of Geologia Croatica (SCI) on the “Sustainability of the Karst Environment” including selected papers presented at the karst conference in Plitvice in 2009, where the KC held their 1st Meeting:
http://www.geologia-croatica.hr/ojs/index.php/GC/issue/view/12/showToc

2009: Jiang Guanghui and Liu Zaihua have edited a special volume of Carsologica Sinica, including papers presented during the opening ceremony of the International Research Centre on Karst (IRCK-UNESCO) in Guilin, China, in December 2008.

2009: N. Kresic and Z. Stevanović edited a book on the “Groundwater Hydrology of Springs”, with contributions from N. Goldscheider, O. Bonacci, M. Petric, G. Günay and other co-authors:
http://www.elsevier.com/wps/find/bookdescription.cws_home/714846/description

2008: B. Andreo edited a special volume of the International Journal of Speleology on the “Hydrogeology in Caves”, with contributions from other KC members:
http://www.ijs.speleo.it/issue.php?id_volume=67 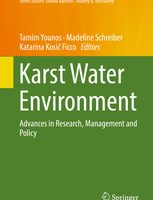 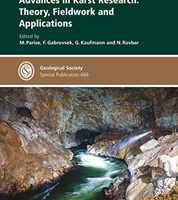 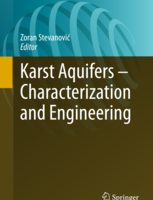 Advances in Research in Karst Media 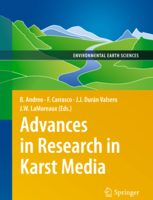